Record-breaking India batsman way ahead of the pack

‎ Sachin Tendulkar has announced his retirement from one-day international cricket, bringing an end to the most successful career this format of the game has ever seen. The 'Little Master' made his one-day debut in 1989 and collected 463 caps. He excelled in the 50-over format and became the world's top run-scorer with 18,426 at an average of 44.83, including a record 49 centuries. "I have decided to retire from the one-day format of the game," Tendulkar said in a statement. "I feel blessed to have fulfilled the dream of being part of a World Cup wining Indian team.
"The preparatory process to defend the World Cup in 2015 should begin early and in right earnest. I would like to wish the team all the very best for the future. I am eternally grateful to all my well wishers for their unconditional support and love over the years." His last one-day appearance came back in March against Pakistan, the team against whom he made his debut almost exactly 23 years ago. Tendulkar also took 154 one-day wickets, his best return five for 32 against Australia in 1998.

The ICC World Twenty20 2012 tournament consisting of 27 Twenty20 matches will be hosted by Sri Lanka in Sep-Oct 2012. The first T20 match will be between Sri Lanka and Zimbabwe on September 18, 2012 at 19:30 local time to be played at Mahinda Rajapaksa International Stadium, Hambantota. Latest News from the ICC World Twenty20 2012: WT20 2012 Cup Index | Championship Schedule | Groups & Points | Teams | WT20 Warm-up Matches 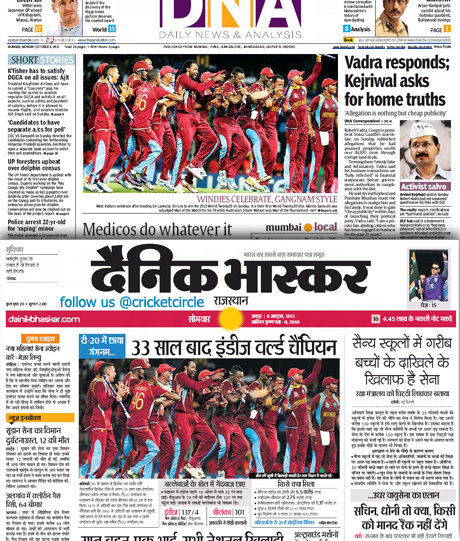 A Marlon Samuels-inspired West Indies recovered from an awful start to beat Sri Lanka and clinch the World Twenty20 title. The West Indies, restricted to 137/6 after electing to bat, hit back to defeat Sri Lanka by 36 runs on Sunday. It was the Caribbeans' first major global title after a gap of 33 years having won the ODI World Cup back in 1979.Marlon Samuels smashed a heroic 78 off 56 balls to steer West Indies to 137 for six after only 32 runs came off the first 10 overs. The first run off the bat came off the 17th legal delivery. The hosts were all out for 101 in 18.4 overs. Picture: West Indies captain Darren Sammy and Sri Lankan captain Mahela Jayawardene pose for photographers with the ICC Twenty20 Cricket World Cup trophy in Colombo.

Final 15 members in each team

Indian captain, Unmukt Chand, scored a century to take India to their third under-19 title after his team frittered away the early advantage as defending champions Australia recovered from a shaky start to post a competitive 225 for 8 in the final of the ICC Under-19 Cricket World Cup on Sunday. Courtesy a magnificent unbeaten 111 by Unmukt and his unbroken partnership of 130 runs with glovesman Smit Patel, India overhauled the competitive target on a bouncy strip with 14 balls to spare.This was India U-19s first triumph after Mohammed Kaif and Virat Kohli led their respective teams to victory in 2000 and 2008 editions respectively.

New Zealand will play two Test matches and two Twenty20 Internationals (T20Is) in India as part of their preparations for the ICC World T20 in September in Sri Lanka. The series will start with a Test match on 23 August 2012 and will end with a T20I on 11 September 2012.

"The Wall" holds the world record of 210 Test catches

After 16 years of steadfast service, Rahul Dravid, the former Indian captain, has announced his retirement from international and domestic first-class cricket at a press conference in Bangalore. The Karnataka batsman is 30th in all-time Test best list, having spent a total of 35 Tests and 226 days at the top, with the highest-rating of 892 which he achieved in March 2005, an ICC release stated. Among India batsmen, only Sunil Gavaskar (916) and Sachin Tendulkar (898) have achieved higher career ratings than Dravid. He was also the first recipient of the ICC Test Player of the Year and the ICC Cricketer of the Year (the Sir Garfield Sobers Trophy) awards, presented in 2004 in London. The 39-year-old Rahul Dravid, nicknamed "The Wall" for his patient batting style, has scored 13,288 runs in 164 Tests since making his debut as a 23-year-old at Lord's in 1996, second only to compatriot and master batsman Sachin Tendulkar (15,470), and has made 36 centuries at an average of over 50. He has amassed a world record 19 century partnerships with Tendulkar and has been involved in 80 century partnerships with 18 different partners. In 344 one-day internationals, Dravid scored 10,899 runs, and was top scorer in the 1999 World Cup in England with 461. He captained India in 25 Tests and 79 ODIs between October 2005 and September 2007, during which time India won Test series in England and West Indies.Dravid will lead the Rajasthan Royals in this year's Indian Premier League 2012 which runs from 4 April to 27 May.

I don't think a player like Rahul Dravid can come into the Indian cricket team (again).

There can be one and only one Rahul Dravid.

He is the only cricketer after Bradman to do so well abroad. He is a champion.

He is one of the greatest batsman in world cricket.

Just ahead of the IPL auction, Sahara India ended their 11-year long sponsorship of Indian cricket team and withdrew their ownership from IPL franchise Pune Warriors. Sahara has requested the BCCI to pass on Pune Warriors team to some other interested party immediately. Sahara was paying Rs 3.34 crore per Test match, one-day international and Twenty20 International under the latest terms signed on on July 1, 2010. A Sahara official said the Chairman would address a press conference in Mumbai at 4pm on Saturday.Read Sahara India's statement on its dissociation with BCCI here.

India beat Sri Lanka by six wickets in a pulsating final to deliver World Cup glory to their cricket-mad population for the first time since 1983. Sri Lanka smashed 91 from their last 10 overs to post 274-6 in Mumbai, with Mahela Jayawardene making a superb 103. India lost Virender Sehwag and Sachin Tendulkar early on but Gautam Gambhir and Mahendra Dhoni rebuilt the innings. Gambhir was out for 97, but captain Dhoni's brilliant unbeaten 91 led India to a famous win with 10 balls to spare.